The Auxiliary has several signature fundraisers, including the “Art At Overlook” Auction & Cocktail Reception and the Gift Shop & Bloom – the Medical Center’s gift shop and floral boutique.

Founded in 1916, the Women’s Auxiliary of Overlook (now Overlook Auxiliary) was created by 16 community-minded ladies who saw the need for a local hospital in Summit, New Jersey. Up to that point, travel to Newark or New York City was required to receive needed medical care above an ordinary doctor’s visit.  The Auxiliary has since grown and changed over the years into a well respected, non-profit community organization serving Overlook Medical Center, a US Top 50 Hospital, and the surrounding medical center community.

In the early days, during two World Wars, and as the Auxiliary grew, members held fundraisers and helped with operational tasks like folding bandages, redecorating hospital rooms, and sewing linens. The Auxiliary was responsible for all the linens in use in the hospital at that time.  Mondays were known as ‘sewing days.’  Major changes to the Auxiliary began under Eloise Walker’s presidency (1947-1949) with the addition of a Tea Room and Gift Shop.

During Gladys Travis’ presidency (1949-1952), the Follies were initiated and Jean Hudson founded the Twigs,  increasing membership in the Auxiliary tenfold. With help from the Summit Playhouse Group and the Chatham Players, the first Follies in 1949 had a cast of 185; it was such a success that the next in 1950 had a cast of 220 people. In three years, 1949-1951 the Follies raised $38,000 for the hospital. Then followed a series of musicals: “Show Boat,” “Carousel,” “Hello Dolly,” and in 1969, “How to Succeed in Business.”

In 1976, the Auxiliary celebrated the Overlook Hospital Diamond Jubilee with a generous donation towards the opening of the Center for Community Health. Guests for this grand event were Her Serene Highness, the Princess Grace of Monaco as the Honorary Chairman and Bob Hope, adding his blend of warmth and funny stories.

In 1996, at the celebration of the Auxiliary’s 80 years of service, the watch words were “Commitment, Challenge, Compassion, & Camaraderie”; commitment to our hospital, challenge to use our talents constructively, compassion for the ill or injured, and camaraderie with people who work with you to lend a hand. In fact, when the Auxiliary celebrated its centenary in 2016, its Board adopted and updated the phrase to “Commitment, Compassion and Community” in recognition that its mission includes service to the entire Overlook Medical Center community.

Past endeavors from the Auxiliary include baby photos, patient television services, and a traveling gift cart with magazines and small patient craft projects. Cooking is our Bag was a very popular Auxiliary cookbook. It was a compilation of over 500 recipes from Auxiliary members, Overlook staff, celebrities, and local restaurants.  A later cookbook, Great Gatherings, was published in 2003 and included tasty recipes from nearly 100 members.  Both cookbooks were successful fundraising and community-making efforts.

Between 1982 and 1990, the Auxiliary raised over two million dollars. In 1990, the Auxiliary pledged $500,000 to help finance the Child Care Center for employees. Other major fundraising endeavors during this time include the Center for Community Health, renovation of the main floor, a CAT scanner, six kidney dialysis units, and two mobile intensive care vehicles, to name just a few. In the recent past, some of the funding from the Auxiliary includes the Caregivers Center, the Emergency Department, the Neuro-Science Department, the Pediatric Playroom, and Health Start.

A significant amount of Auxiliary monetary contributions to the hospital are the result of fund raising activity by the Twigs. In 2008, the Auxiliary co-sponsored the Twin Maples Centennial Show House. Special events such as the biennial Kitchen Tours and the Overlook Hustle add some fun to Auxiliary and Twig fund raising activities. In 1992, in response to a need for organ donors, the Donate Life Committee was initiated. It was part of the Auxiliary until 2012, at which time the Twig disbanded and members became part of NJ Sharing Network.

The needs of the hospital change as the Auxiliary continues its work into the 2lst century. Kitchen Tours in 2011, 2013, 2015, and 2017 benefited Ovarian Cancer, the Valerie Center, Pediatric Eating Disorders, and Hospice Complementary Programs, respectively, and raised over $90,000. A recent pledge of $100,000 over a four to five year period to the Emergency Department has helped to meet the needs of this increasingly busy area.

As the needs of the Medical Center community changed, so did the makeup of the Auxiliary with the launch during the presidency of Christina Amundson and Anne St. Clair of the Junior Twig to include high school and college age students interested in joining our mission.  The work of the Auxiliary is as varied as its members with some members focusing on fundraising and others on hands-on-service:  Auxiliary members bring holiday joy to the public areas of the Medical Center; Twig members sew masks, knit booties, and make other items like No Sew Fleece Blankets for the Oncology Department and Busy Aprons for stroke recovery patients that enhance the excellent care that we expect from our Medical Center; Twig members serve coffee and tea to patients, families, and visitors to the Oncology Center twice a month, and the Auxiliary Gift Shop and Bloom puts together Comfort Care Baskets for staff and patients.

Atlantic Hospice honored the Auxiliary for its support of Camp Clover, a camp for children affected by the loss of a family member.  Twig members also continue to raise monies for signature projects or items from our Wish List. Twig members and General members are volunteers who carry on the work started over a century ago. The Overlook Auxiliary Gift Shop & Bloom, the Auxiliary’s primary fundraiser, is located in the main lobby of Overlook Medical Center where it serves the needs of visitors, staff, and volunteers alike.

During the COVID-19 pandemic, the Overlook Auxiliary has continued its support the Medical Center in a variety of ways by not only raising over $175,000 to purchase needed sterilization equipment but also raising $27,000 through its annual Phantom Ball, its virtual fundraiser, to help support COVID-19 patients post-hospitalization.  Additionally, the Auxiliary garnered support from the community to assist with:

Overlook Auxiliary members and the Gift Shop & Bloom make it possible to continue the long record of support for Overlook that started in 1916.  By raising over $20 million during its illustrious history, the Auxiliary can be proud of its contribution to the Overlook Medical Center and the community it serves.  Although we no longer sew the linens, you will hear about the work of Auxiliary members who quietly go about serving Overlook in many other ways.  As we move into our second century and a rapidly changing healthcare world, the Auxiliary and its members are ready to serve more than ever. 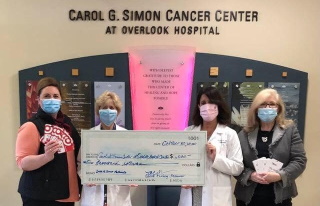 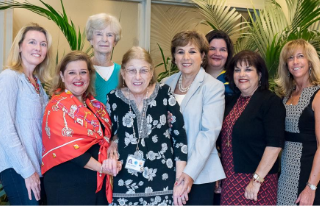 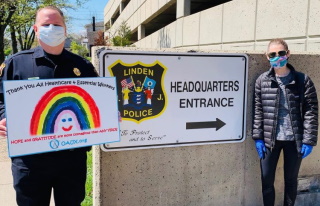